Mike Cooley of Drive By Truckers and his weird Tele 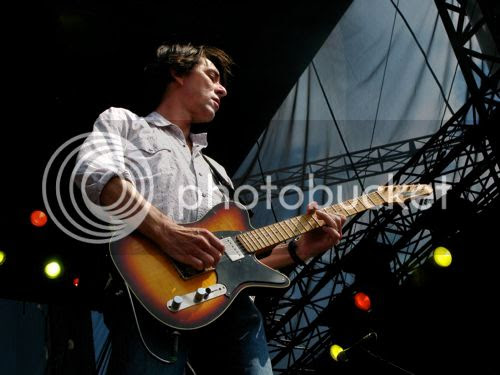 You know what I'm like. I see a weird guitar and I just have to identify it. So, last night I was watching Later... with Jools Holland which had Drive By Truckers among the studio guests. Of course, my eye was caught by the guitar being played by the singer/guitarist Mike Cooley. As can be seen in the photo opposite, it's a Tele-style guitar with a droopy-looking lower horn.

It turns out that this guitar was built by Scott Baxendale, who has also built several other guitars for Drive By Truckers. The guy's got quite an impressive CV in the world of guitar restoration and building, having worked for Mossman Guitars, Gruhn Guitars, Hard Rock Cafe among others and having been responsible for the care and maintenance of the Grand Ole Opry Museum collection. His clientele also includes Steve Howe, Henry Rollins, Tito and Tarantula, The Vines, The Blasters, Jason Isbell, Centromatic, Shooter Jennings, Hank III, Charlie Louvin, Jorma Kaukonen, Butch Walker, Rilo Kiley, The Black Crowes, The North Missippi All Stars, Booker T. Jones, Mick Jones, Franz Ferdinand, Justin Townes Earle... the list goes on and on! (Although I thought Booker T. was a Hammond organ player?)

By the way, I'm not sure who to credit for the photo reproduced here. I found it here and apologise in advance for borrowing it but it does illustrate my post quite nicely.

Guitarz - The Original Guitar Blog - now in its 9th year!
Posted by Gavin Lloyd Wilson at 10:24 am