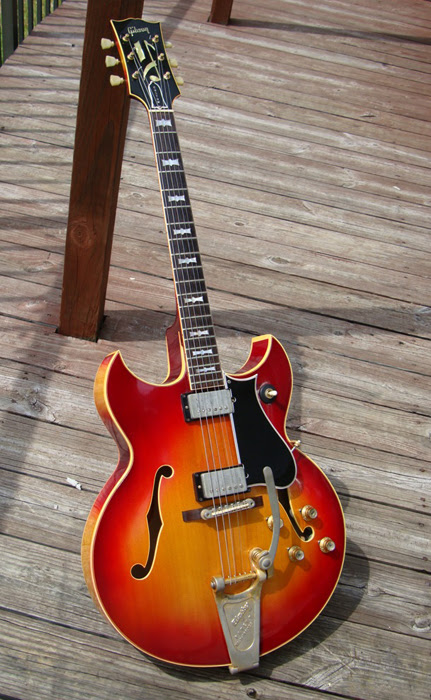 I didn't know so far the beautiful Gibson Barney Kessel Custom (there are also plenty of interesting guitars on this website) - and I don't remember ever seeing before a semi-hollow guitar with this kind of double florentine cutaways (the model presented here is the custom one with the Bigsby trem).

Its line is stunning, another example of what you can get when you slightly twist a classic design, it's both familiar and disturbing - a powerful combination. Actually when it was released in 1961 it wasn't so successful, probably too aggressive for its jazz target... This guitar was discontinued in 1973, but I'm sure that if Epiphone would release an updated version today, it would be a hit for all the post-Queens  of the Stone Age guitarists!

A similar but downsized design was used for Johnny A.'s signature Gibson model in 2003 - and it doesn't work, it looks like a SG front glued on a semi-hollow body, it doesn't have this generosity of the shape that you also find on some thinline Rickenbackers.
And it looks super cool with black finish like here. Another guitar to put on my GAS dream list for when I suddenly become a billionaire without doing anything to make it happen.
bertram

Guitarz - The Original Guitar Blog - now in its 9th year!
Posted by bertram at 8:06 am