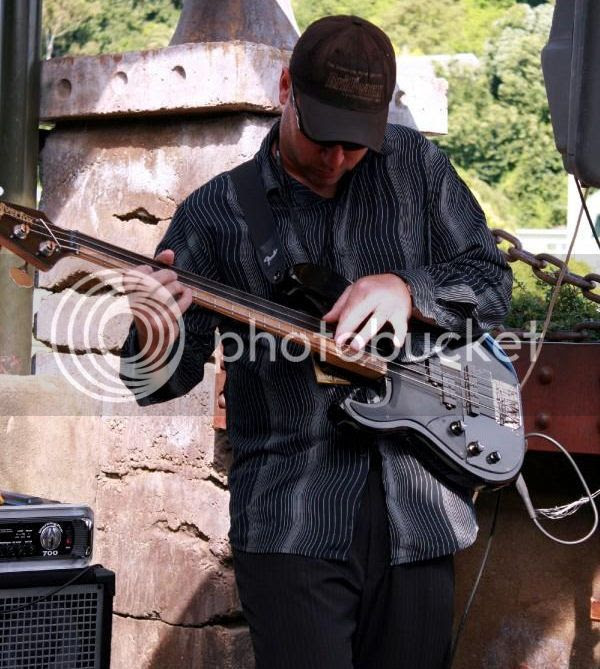 Here is my bass player Brian Franks. He is a lefty playing a right-handed bass - strings upside down - fat ones at the bottom.

He has modified the neck of his bass, making the 2 skinny strings FRETLESS, and the 2 fat strings FRETTED - if you look carefully at the pic you will see.

When he just wants to chug along he plays on the frets - when he wants to solo he can get freaky on the fretless - it's a fantastic concept.

He has been playing this bass for 10 years in my band BRILLEAUX.

Thanks for that, Graham. It's nice to see that the spirit of innovation is alive and well, and that people are actually making good use of such ideas.

It's not a totally new concept. I believe that Wilkes Guitars here in the UK used to offer this 2 strings fretted/2 strings fretless layout as an option on their basses. There was another option to have the bass fretted for all the strings half-way up the neck and then to have the rest of it fretless.

My favourite fretted/fretless concept is from a Russian manufacturer called Mikey Guitars who produce and guitars and basses with rotating frets allowing you to change from fretted to fretless at the flick of a switch.