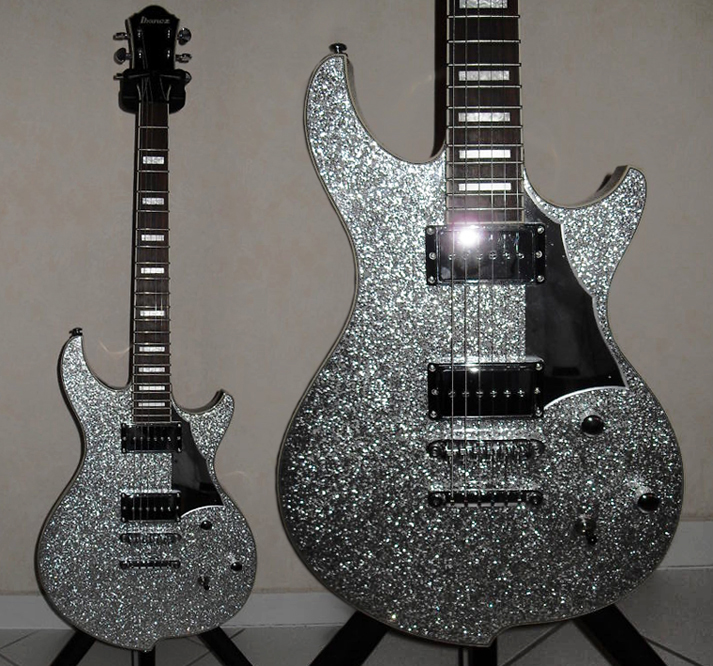 I hate KISS because they associated for decades Japanese asymmetric glittery guitars with falsetto voice disco, tongue showing and cheap carnival make up, when it should belong to androgynous people in glamorous purple fur coats and feather boas playing anthemic art rock.
Anyway, here is the Ibanez Darkstone DN600, and no it was not released in 1973 but in 2010 - yes it happens that we show here recent models! I actually noticed the black model Darkstone DN500 when it was released in 2009 (finally a non-JEM solid body new model by Ibanez!), still, it was just another metal guitar.
This one is different, not only with its glittery finish (they call it shattered mirror, I call it crushed glass), but it has humbucker size single coil pickups - like the P90s they do now for modifiers - that make it a more attractive guitar to me (I'm in a P90 phase). Probably it could still be considered as a metal guitar but who cares, you don't have to do metal with it - actually if the guitars were always used for what they've been designed for, rock music wouldn't exist...
Bertram

Guitarz - The Original Guitar Blog - now in its 10th year!
Posted by bertram at 8:34 pm