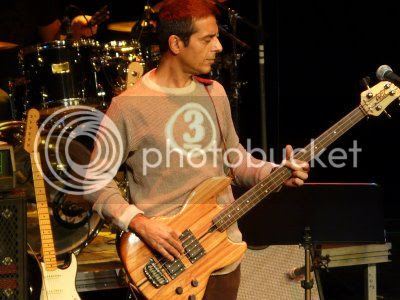 This is sad news. The world has lost one of the most innovative musicians ever, a guy who couldn't read music, claimed to know nothing of musical theory, and yet his playing was fluid and innovative.

Mick Karn, most famously was bassist with 1980s glam/art rock band Japan, lost his battle against cancer yesterday (4 January 2011). His fretless bass playing was so unique in style, so very distinctive that you couldn't mistake it for anyone else.

My favourite of his recordings was "The Waking Hour" by Dalis Car (Mick Karn with vocalist Peter Murphy from Bauhaus and drummer Paul Vincent Lawford) which contains some stunning compositions from Karn plus some phenomenal fretless bass. However, the clip I am showing below is taken from BBC 2's "Old Grey Whistle Test" from when there was a Musician's Union strike (which is a disasterous situation for a music show) and no live music was allowed. Bending the rules slightly, the programme had Angie Bowie reading one of her poems accompanied by Karn improvising on fretless bass (a section of his bassline here would later be used in one of his Dalis Car compositions).