You can never have too many necks 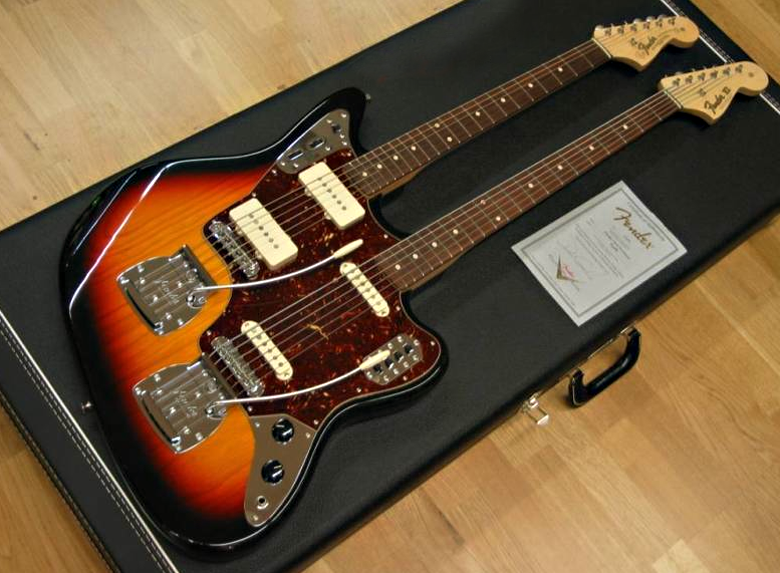 I bet you thought was going to be about one of those Rick Nielson multi-neck Cheap Shot guitars eh? I should coco! This is something I haven't come across too often before. Fender is a company I don't readily associate with doubleneck guitars. In fact I don't think I've knowingly seen any before - not that I've been looking, I have to add. The only Fenderish doubleneck I've happened across recently is the handsome, though not actually from Fender per se, creation from the skilful hands of young Bertram (with a little help from one of his woodworking associates). We have a fondness for the Fender Bass VI here in Guitarzland so it's an even bigger delight to find one Siametically co-joined to another of our favourites - the Fender Jazzmaster.

It's on the Austrian eBay site and I don't speak German. Maybe Bertram can help out with some of the details. As far as I can make out, it's a newish - 2010 - model, one-off, masterbuilt by Dennis Galuska (who's probably famous - sorry Den, not terrible au fait with the world of Lutherie) for the Frankfurt Musicmesse 2010 (that's a bit unfortunate isn't it, Musicmesse? Not really encouraging, eh? Probably means fair, exhibition or show or something similar. Maybe we should let them know. Might improve attendance a bit).

By the way, the body is lightweight ash with maple necks and rosewood fingerboards with Nitrocellulose lacquer - NOS (I thought that meant New Old Stock. Probably something else in German).

Amazingly enough (to me at least) it seems Yngwie Malmsteen also played a Fender double-neck 12/6 (probably very fast and very proficiently). That sounded a bit sarcastic didn't it? At least he's not Steve Vai. No, I didn't mean it. OK, YM isn't really my cup of tea, I'll admit, but until this week I'd have said the same about Steve Vai. Until... I Youtubed some of his performances and was a little surprised. Maybe it's a big act, I don't know, but he seems a nice guy, a great showman, a big ham, doesn't take himself too seriously (for a rock star) and plays with a ferocious passion. I'm not gonna rush out and buy his back catalogue but I don't mind anyone knowing I now have one of his tracks on my iPod - the Crazy Horses/Edgar Winter tinged-one-riff-all-the-way-through "Bad Horsie". It's only Rock N Roll etc... Stupid faces and all.

Anyway, Happy New Year to all. Taken my own sweet time to get back into second gear this year, sorry all.

David in Barcelona where the weather isn't too bad although it's a bit soon for the beach.