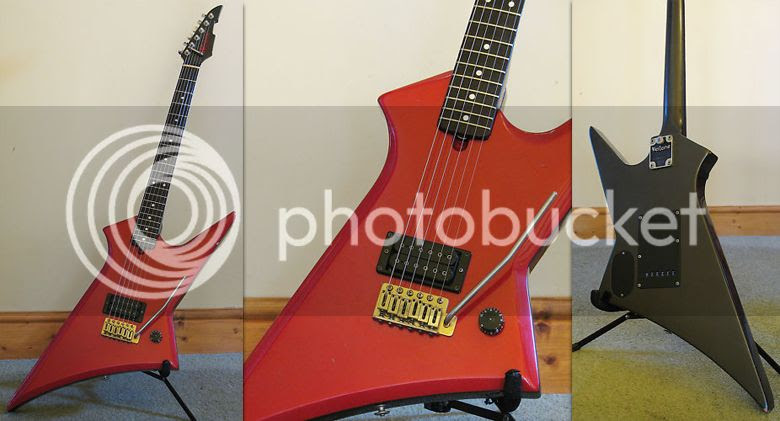 Recently on Guitarz we've been looking at several of the 1980s Matsumoko-made Westone guitars. The above-pictured guitar is another of the pointier examples of the species, the Westone Raider I, this one currently being offered for sale on eBay UK, with the auction ending in just over 12 hours as I type this.

Of course, with a pointy guitar of this age there are the inevitable knocks to the extremities, but that considered this example looks to be in very good condition.

When we looked at the Westone X5RD Monark the other day, Grk! commented "I've a soft spot for Westone's pointy guitars. The only really gruesome one is the Raider, especially with that two-tone sparkle. Have you ever seen any actual metallers play one of those? I've only seen it on the cover of a Culture Club single & being twanged by one of We've Got a Fuzzbox & We're Gonna Use It!"

Well as I recall, it was one of the cheapest guitars in the Westone catalogue at the time so perhaps many bands thought it was too "budget" to be seen with. But I also remember The Damned appearing on the BBC comedy show The Young Ones in 1984 with guitarist Roman Jugg using a Westone Raider I in two-tone glitter finish. (The Damned later toured their "Phantasmagoria" album with lead singer Dave Vanian playing this same guitar for one song each night.)