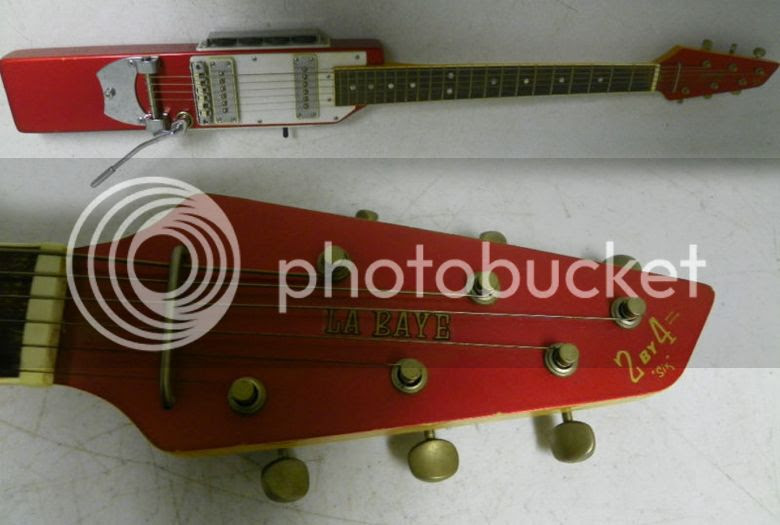 Here's a LaBaye 2X4 "Six" guitar - a rarity that I've not seen turn up on eBay before (other than the short-scale bass version).

LaBaye 2x4 guitars were produced in the Holman-Woodell factory in Neodesha, Kansas in 1967, and share features and hardware with the Wurlitzer-branded guitars that were built in the same factory. The guitar is so-called because it is modelled after a 2-by-4 plank with a neck attached to it. Controls are positioned on the top edge of the guitar except for the pickup selector on the guitar models situated on the bottom edge where it is very easy to inadvertantly knock and change the pickup selection. Short-scale bass, guitar and 12-string versions were all produced plus allegedly one or two long-scale basses, but none were successful and production ceased within a year.

This particular example looks to be well-used and is being sold "as is". The auction has started with a low price, and it'll be interesting to see what this eventually sells for. The action does look a little high. Maybe Devo's Bob Mothersbaugh should buy it as a back-up guitar for the one he uses on "Smart Patrol/Mr DNA". I don't think the guitar's action is very important on that "solo"!