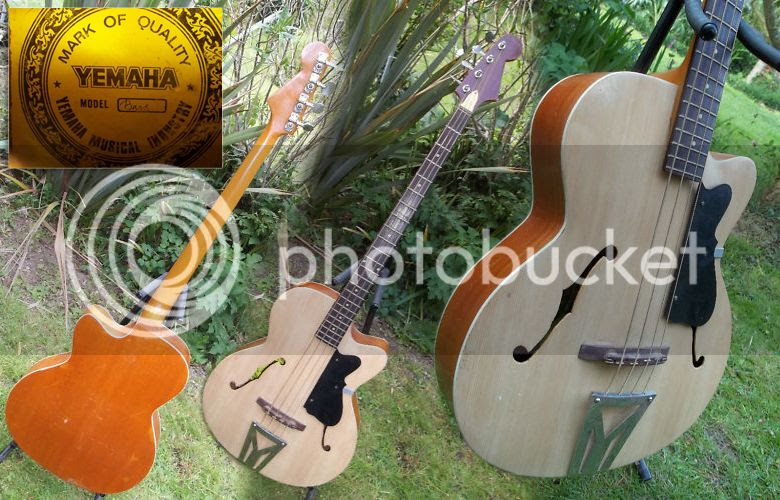 This is a Yemaha archtop acoustic bass guitar, and no that isn't a typo! All I can find out about "Yemaha" guitars is that they were made in India and do not have a very good reputation. I wonder if they are a relative of "Givson" guitars? (Coincidentally, Guitarz is currently being plundered by a scraper blog based in India that has changed one letter of the blogspot URL. Is this common piracy practice in India, I wonder?)
This post originates at http://guitarz.blogspot.com - beware of those damned scraper blogs!
Anyway, this bass is a bit of a mystery. Correct me if you will, bass-heads, but it was my belief that the acoustic bass guitar was quite a modern innovation. My understanding was that the Ernie Ball Earthwood acoustic bass introduced in 1975 was the first such production-made acoustic bass, and that Guild and Eko were also early players in this field. (I don't claim to be an expert - I'm just someone who is interested in guitars and somehow manages to soak up all this information, so please do say if you know differently!)

With the onset of MTV in the 1980s and their Unplugged series the acoustic bass soared in popularity and is now quite an ordinairy sight - walk into any music shop and you'll find at least one on display.

However, the seller of this Yemaha believes it originates from the 1960s, although without offering any evidence to support this claim. I think it's far more likely to be from the 1980s or 1990s and is just well-used and battle-scarred making it look older. I did wonder if perhaps it originally had a pickup and would have been a semi-acoustic bass, but there aren't the holes in the body for volume and tone controls - unless all electrics were mounted on a pickguard, which would mean the pickguard we see in the picture would be a replacement. However, I feel this is unlikely, although not impossible.