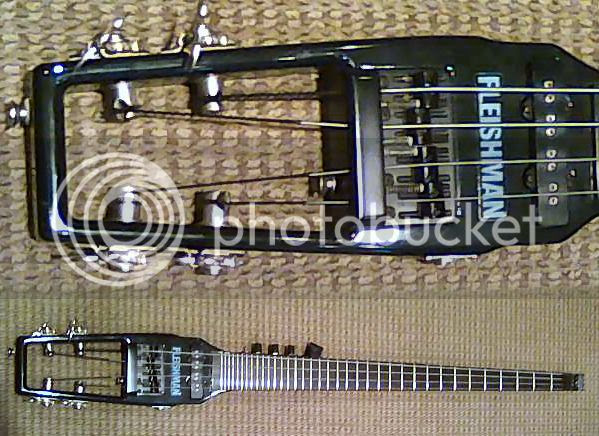 Here's a rare Fleishman bass from the mid/late 1970s. It is very minimalistic and appears to be all neck. It has a 3-octave fretboard - that's 36 frets! This bass was one of Fleishman's own brand instruments, and pre-dates the similar basses he designed for Hondo which differed in having 28 frets.

We looked at such a Hondo "Flash" bass on Guitarz in March 2010, when I rather unfairly commented on Hondo and Fleishman "jumping on the headless bass bandwagon". I've since edited that comment, but think it's only fair to let Harry Fleishman put the record straight:


A quick note to the "bandwagon" comment. International Musician Magazine and other bass magazines have credited me as the pioneer of headless basses. In fact, I suspect they were around long before me, but in the modern era mine were the first, dating to 1975. Again, I've since then seen "headless" instruments from the 19th century. I moved the tuners to take the weight off the neck; that simple. It does help backaches.

My personal favorite "headless" basses are Claudio and Claudia Pagelli's beautiful gold-leaf bass, and my own RED ROCKET EUB. Someone wrote that a headless bass is like a headless woman. That's why I named my headless with a body "Jayne."

Thanks for getting in touch, Harry. I think maybe I'd rather naively assumed that Steinberger started that whole headless bass craze that took off in the 1980s (the first Steinberger L-series bass was produced in New York in 1979). There were certainly enough copies around that were obviously directly imitating the Steinberger, not just in headlessness but also in body shape. But yeah, I know, "Never assume..."

(Thanks also to Vince Gotera who posted the Fleishman bass auction on our Facebook page).