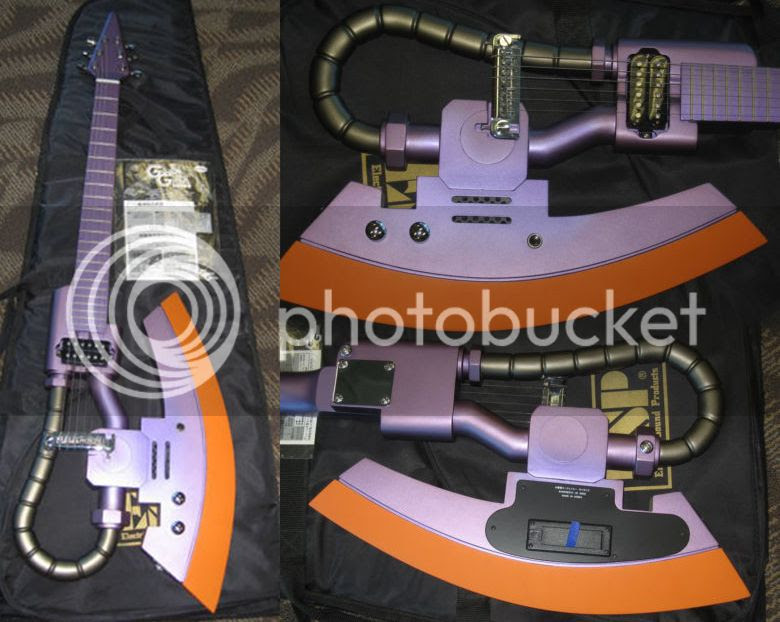 Here we see an ESP Gundam Axe guitar listed on eBay with a Buy It Now price of $799. The seller doesn't tell us very much about it, only that he bought it in Japan in 2007 literally whilst running for the return flight home.

The insubstantial body does look very much as it has been crafted from plastic; the fact that the blade section of the axe shape contains a built-in amp and speaker make this all the more likely. Of course, ESP are no strangers to the use of plastic in their guitar bodies, witness the Devil Girl.

As for the shape of the guitar it is most odd, and especially strange for guitar that looks designed for the metal market it has a lone humbucker pickup in the neck position and not in the bridge position. Also with the bridge having such a small footprint on an area of "body" comprising more thin air than actual body material I can't imagine that the guitar would sustain very well.

Although it looks very metal the ESP Gundam is more of a novelty guitar; it's another guitar inspired by a Japanese anime series, the Gundam being giant fighting robots or "Mobile Suits". The guitar we see here appears to be based on a weapon as used by one of these robots.

Personally I think I prefer the Doraemon guitar (now, don't get all technical with me and say that Doraemon was originally a manga series rather than anime - it's all related).