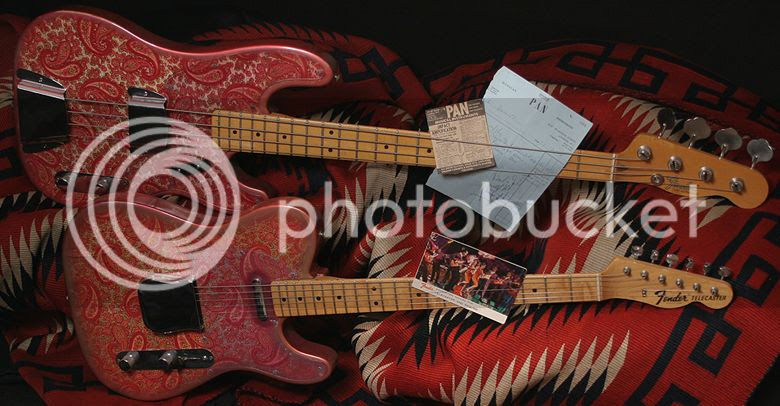 Here we have a pair of original 1968 Fender Paisleys - a Telecaster (as used by Elvis guitarist James Burton) and Telecaster Bass - both in remarkable condition for their age. The paisley design was effectively wallpaper applied to the guitar before being sealed beneath a clear finish with a pink "burst" around the perimeter to hide the edges of the paper. Often with these original paisleys, the finish has cracked badly through to the paper, and the pink finish usually fades to a not unpleasant gold. You'll see in the photo above that the Telecaster guitar suffers from a crack where the right forearm would rest, and the pink burst has begun to turn gold. But look at those necks - hardly a mark on them; they could almost be new. Both guitar and bass are complete with the pickup/bridge covers that players usually remove and use as ashtrays or whatever; their presence here would probably appeal to the collector more than the player.

The pair are currently being sold via Vintage & Rare for $37,000 for the both of them, or $19,500 for the Telecaster guitar and $18,500 for the Telecaster Bass. At those prices we're talking collectors really. For the rest of us who just happen like the look of them, there have been various Japanese re-issues since the late 1980s which you could turn up for a fraction of the price.