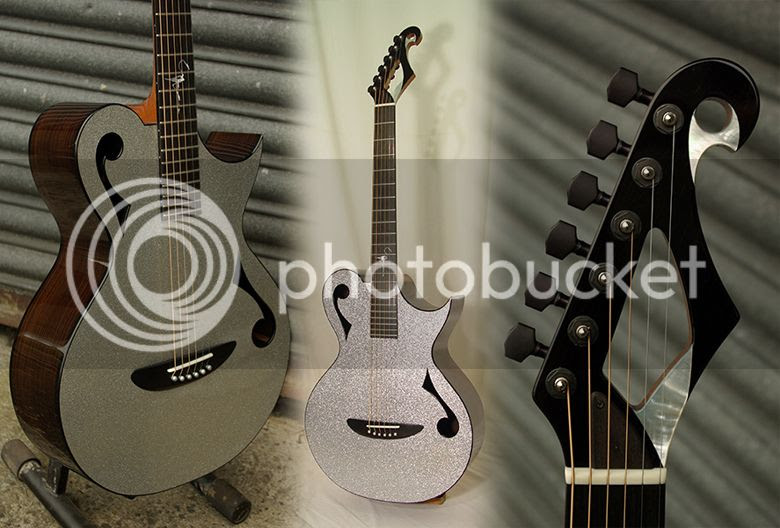 Balazs Prohaszka is a luthier from Hungary who has been building musical instruments since 1994. He has much experience of repairing and building guitars, violins, lutes and double basses so he surely knows his way around the anatomy of acoustic instruments. Prohaszka's fine guitars are made from exotic and choice tonal woods, and he believes that they are amongst the finest in the world. Employed as a senior craftsman with N. Ireland's Avalon Guitars (formerly Lowden Guitars), he builds approximately six or seven "personal" guitars in his own name each year during his spare time.

This Prohaszka silver-sparkle fronted flat-top acoustic guitar is currently being offered for sale via Vintage & Rare and is priced at £2600.00 (approx. €3101.00). The guitar has an original design that should find favour with electric players whilst still retaining the full acoustic body depth. I particularly like the "split" f-hole and the cut-out 6-in-a-line headstock which is quite elegant.

It's an instrument that you can imagine being played in the hands of the singer of a glitzy rock band. However, it might be considered sacrilege to subject a fine luthier-built instrument like this to the rock 'n' roll lifestyle where perhaps some cheaper generic electro-acoustic guitars would be better suited to the role. (Having said that, it doesn't look as if the Prohaszka Sparkle is actually fitted with any electronics, despite the design. I believe it is purely an acoustic guitar.)