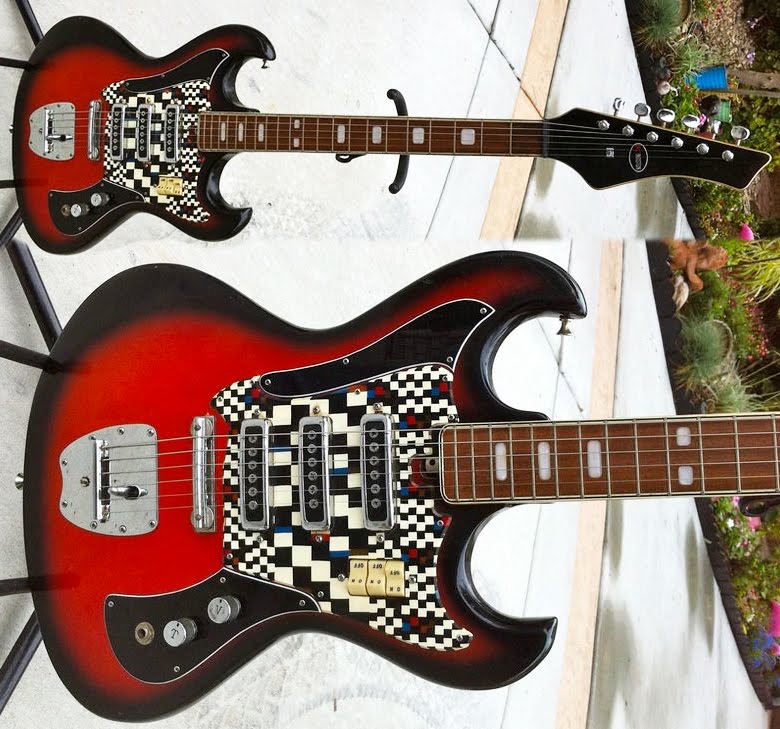 I found this rather natty Kingston guitar in fine chequerboard attire on ebay. It's only let down by an amateur repair job on the headstock and that, I think, you could live with. As with many guitars we come across, it's missing its tremolo arm but, as the seller says, you can find one on ebay (very often for a finger and a toe - which is slightly less painful than an arm and a leg). And if you were that way inclined you toss its original (and admittedly pretty crappy) bridge for something less original but more playable.

This is what the seller says...

"Rare vintage 1960's kingston all original japanese made guitar with rare checkerboard pickguard. All works, low action, three pickups, one volume & one tone control, three pickup selector switches, adjustable neck, 20 frets on a rosewood fretboard with very little wear, new nut, medium action can be lowered by deepening the nut slots, new Fender .009 lite strings. Needs a final setup & the bridge is cheap & should be replaced. Does not have the tremolo bar but can be found online. Someone did a sloppy job of trying to close a glue line separation in the back of the headstock, but it solid & does not affect playability. I've had lots of Kingstons, but none like this. A great addition to any players collection."

Actually, for a BIN of just shy of $300, it's a pretty good buy. Once you add on the $94 dollars P&P and the EU/UK import duty and VAT, it does start looking a little less attractive however. But that's collecting for you, innit?
David in jolly nice Barcelona with an expected daytime temperature of 22°C in October, very nearly November, which isn't too bad.
© 2011, Guitarz - The Original Guitar Blog - now in its 10th year!
Posted by Bat Tao Lo at 10:16 am