BC Rich NJ Series Made In Japan electro-acoustic jazz guitar 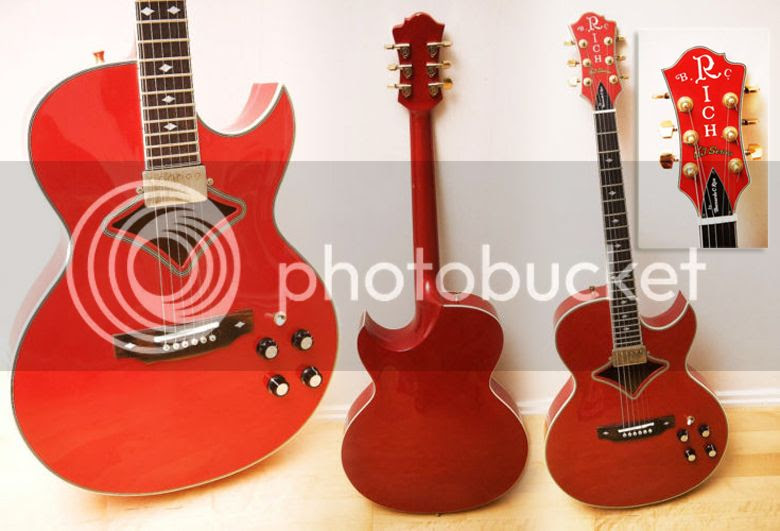 B.C. Rich's NJ Series replaced the B.C. Rico brandname that originally appeared on their Japanese-made instruments and which had been the subject of a lawsuit from the Rico Reed Company. Although the initials NJ stood for "Nagoya, Japan" where the first NJ instruments were built, later Korean-made guitars also received the NJ Series designation.

This B.C. Rich NJ Series electro-acoustic jazzer, reminiscent in some ways of Gibson's Howard Roberts model, is a Japanese-made example which the seller claims was made by the Daion company. (Check here for other Daion guitars that we have looked at previously here on Guitarz). Daion guitars were manufactured from the lates 1970s through to 1984 by the Japanese company Yamaki, so I guess that it was this same company who built these B.C. Rich models rather than Daion specifically.

The guitar features a humbucker pickup at the neck plus a piezo in the bridge, controlled via volume and tone pots for each and a 3-way pickup selector switch all boldy mounted on top of the guitar. The soundhole is a suitably angular shape considering the brand, as is the sharp Florentine cutaway. The heel of the neck is comfort contoured so as to facilitate playing at the top of the neck.

This guitar is currently being offered for same on eBay UK (although the item is actually located in Sweden) with a starting price of £599.99 and a Buy It Now price of £999.99.