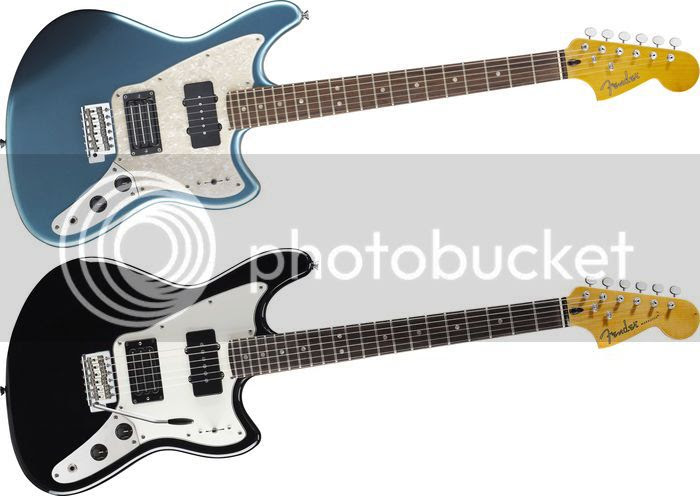 A couple of these aren't entirely new. We've seen the Jaguar Bass before (nice to see it back though) and the Fender Telecaster Thinline Deluxe which combines elements from the Thinline and Deluxe Teles and is equipped with Fender MP-90 pickups.

I do like the new take on the Fender Telecaster Bass which now has TWO humbucking pickups, plus I'm sure a few here will enjoy the sleek stripped-back MP-90 equipped version of the Jaguar.

However, the most interesting design, as far as I'm concerned, is the Fender Marauder (pictured above) which is an almost new design, having been based loosely on a prototype circa 1965-66. The original prototype featured hidden pickups beneath the pickguard. The Modern Player Marauder, however, is equipped with a Jazzmaster neck pickup and a "volcanic-sounding" three-coil Fender Triplebucker bridge pickup. Most intriguing. I'm a little dismayed to see a Fender Strat-like tremolo system; I would have preferred to see a Jazzmaster or even Mustang trem. Oh well.

The Modern Player series are being marketed as "entry-level instruments of remarkable style and substance", although I'm sure they'll appeal to more seasoned players too. Priced at $399 for the Marauder, Telecaster Plus, Jaguar and Jaguar Bass, $449 for the Tele Thinline Deluxe, $499 for Jazz Bass, and $599 for Tele Bass, this range looks very promising.

And isn't it interesting that Fender could make a whole range of guitars WITHOUT yet another Stratocaster variant?