Bizarre electric tenor guitar... or is it an electric banjo? 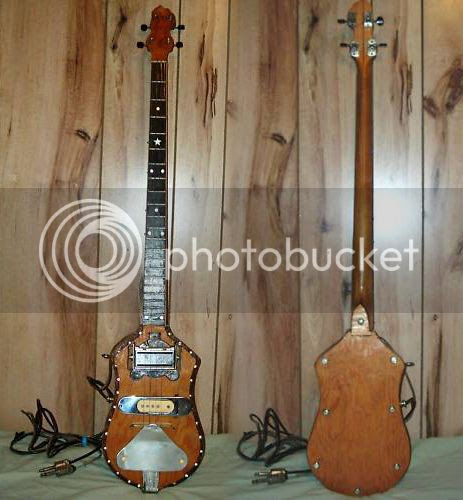 It has a 27" scale, and so is much longer than a tenor guitar which tend to have a scale length between 21 and 23".

I wonder if the neck has come from a 5-string banjo because of its length and because of the headstock shape (although it looks like a piece has broken off). However, it doesn't have the fifth string or the "step" in the neck at the fifth fret where the extra machine head would be located. It's possible that the neck has been reworked to give it an even taper along its length. 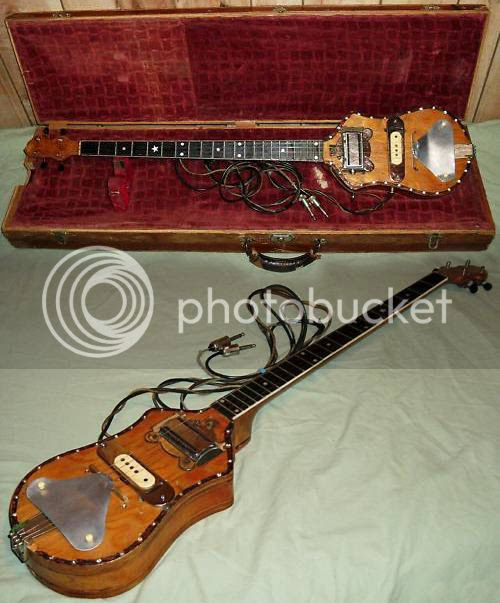 The guitar is fitted with two pickups each of which has its own output lead. These would be the kind of magnetic pickups designed to be used on a flat-top acoustic. The rear pickup is quite a sought-after DeArmond unit (in fact, the same unit that John Martyn used to have on his Martin acoustic. I never did understand, by the way, the reason that there is a polepiece missing in the B-string position. Does anyone know?).

As this is a one-off instrument (apparently having belonged to the seller's grandfather), it's very likely that it was tuned to the player's own requirements and it doesn't necessarily have to adhere to the conventions of guitar, tenor guitar or banjo. Those are just labels that are convenient to help our own understanding.

NB: Please make sure you are reading this Guitarz post at guitarz.blogspot.com and not on a Scraper blog that copies posts without permission (and steals bandwidth) so as to profit from advertising. Please support original bloggers!
Posted by Gavin Lloyd Wilson at 4:44 pm