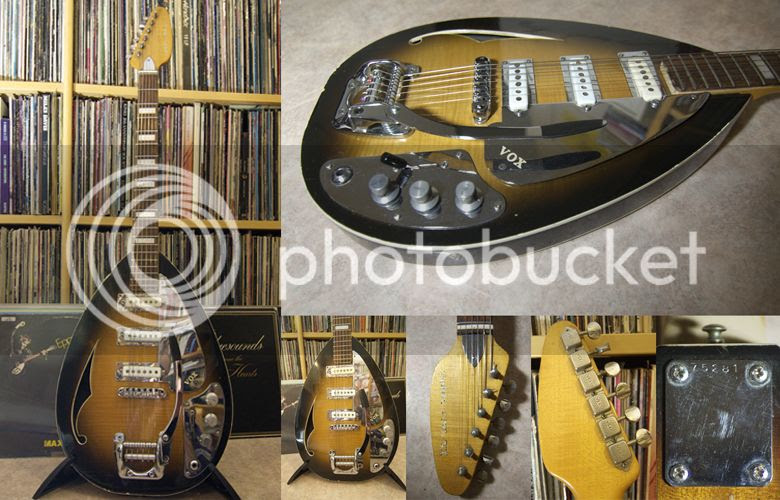 Hi,
just found your site and like to tell that I own rather rare??? (at least here in Finland) Vox Spitfire MK VI I bougth it in 70s and it was in bad condition and somebody has put not-original gibson style bridge to it (and I later change this to roller bridge)

I like to know
- is this italian or english
- what year model?
- is it possible to find original style bridge?

Where to start? This is a bit of a tricky one. According to the official Vox Showroom website, the Spitfire was a solid-body looking like it had been modelled on the Strat. It also insists on referring to the above-pictured guitar as the Starfire Mk VI. However, a close-up photo of the headstock shows the name is indeed Spitfire.

I think we have to assume that where they say "Starfire" they actually mean "Spitfire", and seeing that Latvis' guitar has the "Spitfire" name on the headstock it should be British-built and not one of the later Eko-made Italian versions. Production by Eko began in 1965, but as guitars were still being produced at the Dartford factory in the UK at the same time, I cannot say categorically that Latvis' guitar was from before 1965.

It does however seem very odd that they used the Spitfire name for two very different guitars. But I've seen these kind of naming inconsistencies with Vox guitars before, so I shouldn't really be surprised.

As to the subject of finding an original bridge, unfortunately I think this requires trawling through guitar forums, messageboards, and the listings on eBay. I understand the desire to have the guitar as near to 100% original as possible, but if the current replacement bridge does its job - and it doesn't look too out of place - I'd say live with it.

As ever, if anyone else out there has any more info, please let us know via the comments! Thanks!

NB: Please make sure you are reading this Guitarz post at guitarz.blogspot.com and not on a Scraper blog that copies posts without permission (and steals bandwidth) so as to profit from advertising. Please support original bloggers!