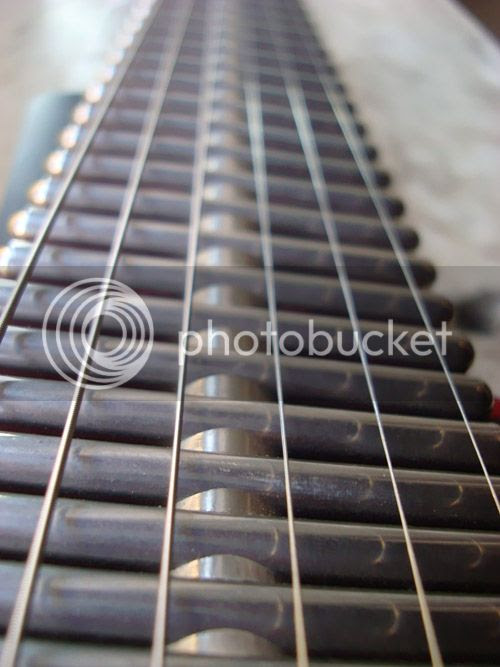 The original handmade Gittler guitar was an object lesson in minimalism. Here was something that looked like a cross between a metal fish skeleton and a TV aerial, yet is was actually a fully-functioning guitar.

The design not only dispensed with the headstock but even the bulk of the neck itself. The neck was simply a steel rod supporting a series of smaller steel rods acting as frets. What there was of the body consisted mainly of six steel rods running beneath the strings. Each of these contained a pickup - one for each string allowing for interesting stereo and panning options.

Original examples were built by Alan Gittler in the late 1970s. In the early 1980s, production instruments were built in Israel by the Bar Rashi company founded by Alan Gittler. There were two models, both of which now had small plastic-resin bodies containing the electronics, whilst one model had the same plastic material forming a "back" to the neck. This latter version is the one we see pictured here and an example of which was recently offered for sale on eBay. For a picture of the version without the plastic neck back, I refer you to pp.140-141 of 500 Guitars (another little plug there!).

I was fortunate enough to be able to try out each of these models soon after they went into production back in the day. You'd imagine that the model with the plastic material behind the neck would be easier to play. It wasn't. It just made for an uncomfortable, bulky neck. Aesthetically it's not as nice either.

However, the other version - the proper fish skeleton model - I loved.

It wouldn't be a good guitar for shredding on, and I think you'd need to adapt your playing style especially for the instrument. For starters, you need to have the thumb of your left hand firmly on the back of the neck in a classical playing position. I saw one guy trying it out who insisted on wrapping his thumb over the top, Hendrix-style, and that just didn't work. Possibly, you could use this as a tap-style instrument. I think it's one that you need to approach with fingers lightly floating over the frets (I can't say "fretboard" because there isn't one!). It's not a neck you are able to hold, as such.

Alternatively you could view it as the utlimate in scalloping!

If you want to see one in use, most people will point you in the direction of the video of "Synchronicity II" by The Police, but here Andy Summers is merely using his (pre-production) Gittler as a prop. The only example I can find of someone genuinely playing a Gittler is here.

NB: Please make sure you are reading this Guitarz post at guitarz.blogspot.com and not on a Scraper blog that copies posts without permission (and steals bandwidth) so as to profit from advertising. Please support original bloggers!
Posted by Gavin Lloyd Wilson at 3:00 pm