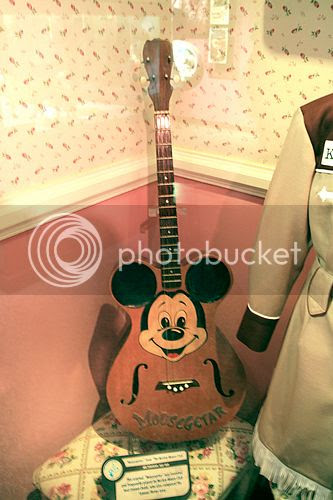 
Hello GL, from snowy and cold Washington DC, where we're about to break our all-time record for snowfall amounts by Wednesday morning.

A guitar that's quite a curiosity is this nearly 60-year-old relic from American television's "Mickey Mouse Club" -- the original tenor "Mousegetar", played by host Jimmie Dodd. This particular instrument is in the Disney Museum in California, and the photo is credited to Megan Duffy, posting on Flickr.

The curiosity is that no one seems to know who built this guitar; whether it was a private luthier, the props department from the Disney organization, or a commercial maker preferring to remain anonymous. This is a perfectly playable instrument and can be seen in web videos from the old Mickey Mouse Club.

Disney manufactured plastic toy copies of this tenor guitar, but this one remains the "cool one". If your followers can contribute any info on this guitar, have at it.

Thanks for that, Alan. When I first saw the photo, I thought that the mouse ears were the soundholes (similar to the "modern" idea of positioning a large soundhole to the left and/or right of the neck on acoustic guitars) but on viewing the YouTube video below I see this is not the case.


Since Disneyland was in Southern California a nearby luthier was sought out to build a guitar for the Mickey Mouse Club show. They had to look no further than Brooklyn Street (since renamed Caesar Chavez Avenue) in Los Angeles.

Two brothers, Porfirio and Candalario Delgado sold guitars they had hand made in Juarez and Tijuana Mexico and they were very successful. They moved their business to Los Angles in 1948 and opened a store called Los Hermanos Candalas where they manufactured and sold their handmade custom guitars. They developed an excellent reputation. Disney Productions asked Candalario, known as Candalas, to build the Mickey Mouse Guitar to their specifications. In fact the store is still there and still selling wonderful hand made guitars and Latin string instruments.

NB: Please make sure you are reading this Guitarz post at guitarz.blogspot.com and not on a Scraper blog that copies posts without permission (and steals bandwidth) so as to profit from advertising. Please support original bloggers!
Posted by Gavin Lloyd Wilson at 10:03 am